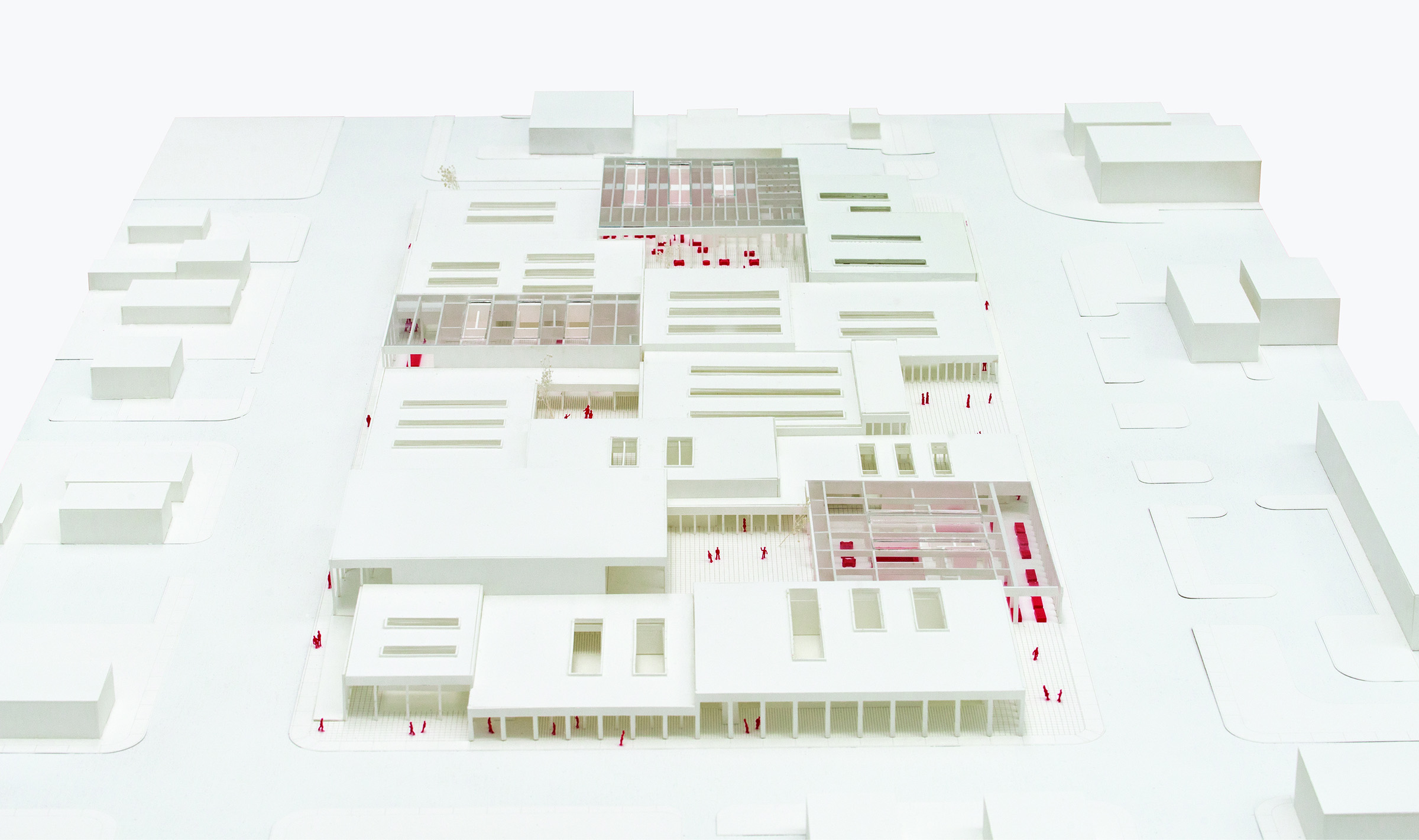 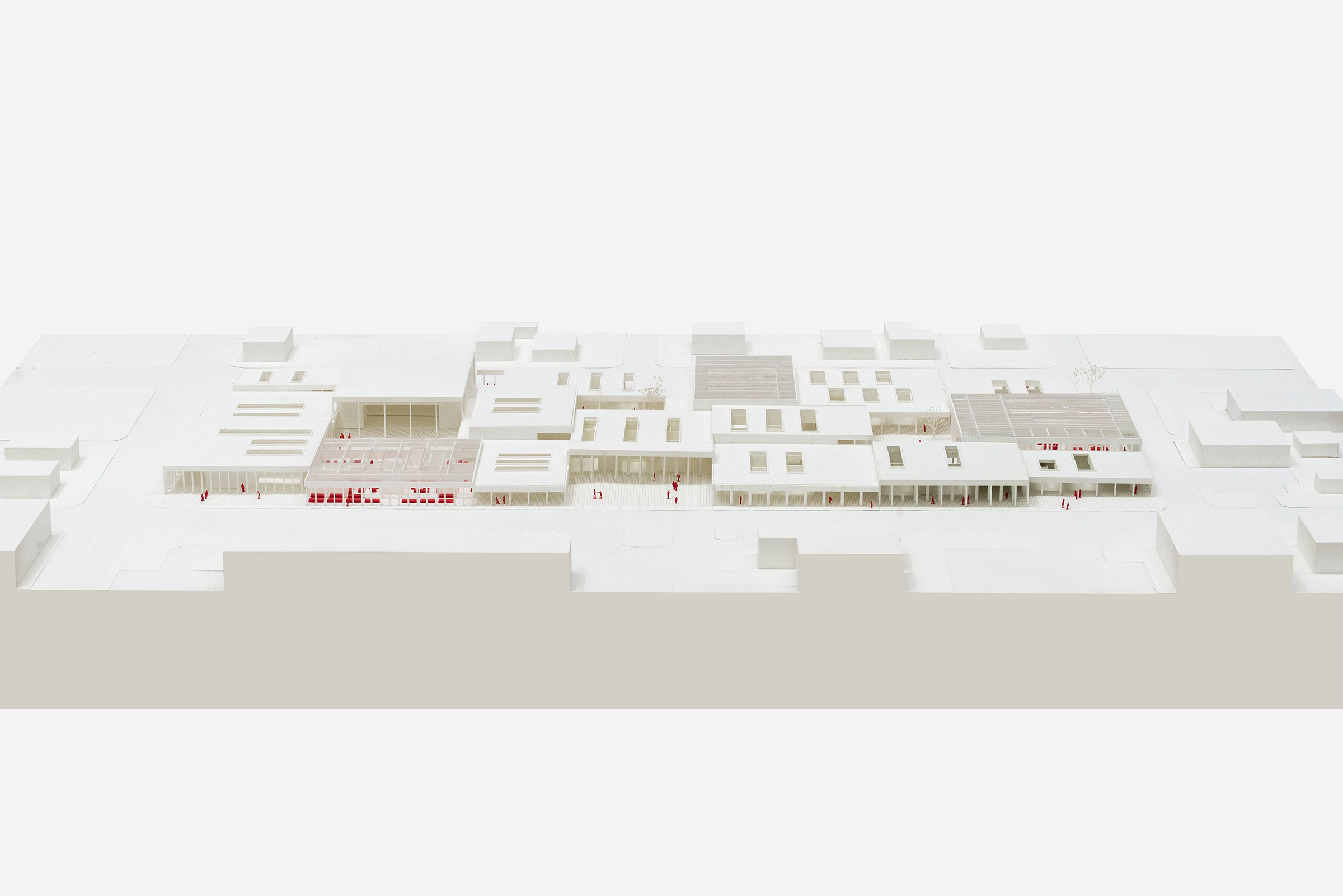 Threshold as Third Space is the final product of Brian Sowell's 2017 thesis at the Rice School of Architecture. The thesis explores the agency of the colonnade as a public space of transition to create third space, balancing the relationship between contemporary work and the urban public environment. Typical strategies to deliver such collaborative and social space rely on either the hyper-flexibility of a free plan, or the specificity of program. In contrast, Threshold as Third Space projects a third position, using formal specificity within the colonnade to exploit the spatial ambiguity of a threshold. By placing public, third space functions in a colonnade threshold around the office, contermporary work shifts to an urban-oriented model of public collaboration. This strategy opens production to the city and allows for unpredictable interactions that can benefit both the producers and consumers of modern work.

Contemporary technology has caused a fundamental shift in the way we work that blurs the distinction between work and home life. The digital revolution essentially un-tethered the worker from their desk as the office changed from a location to access physical files to that of the networked office with technology for remote access. Andrew Laing discussed this shift in his 2013 essay "Work and Workplaces in the Digital City", arguing that as desktop computers brought the advent of the cubicle and tethered workers to their desks, contemporary tools have cut this tie, prioritizing networked knowledge and collaboration as the preferred methods of work. Similarly, Frank Duffy's calls for the "Networked Office" Include the argument that "...unprecedentedly free relationships between the physical and virtual realms (means) boundaries between what is work and what is not are shifting fast. Work is spilling into ever wider and more complex spatial and temporal landscapes."

These shifts point to the growing "public" nature of work: as opportunities for diverse collaboration have superseded the need for a static, consistent workspace, work has grown beyond the traditional boundaries of the workplace and become more urban-oriented. That growth and blurring of boundaries demands a new approach to the spatial boundaries of work that facilitate the shifting collaborative relationships required. The new form of the workplace must challenge the role of the boundary to define the limits of work and rather use the boundary as a threshold to facilitate collaboration between programs and the surrounding environment. The new workplace will be defined by third space thresholds.

The advent of new technologies has seen a shift in office buildings from a focus on accessing knowledge at a computer station to promoting flexibility, collaboration, and in some cases, relaxation. Interestingly, the result has been spaces traditionally understood as third space and belonging to the urban environment have been absorbed and placed within the confines of the office. Spaces like the cafe, informal meeting spaces, or rec rooms are now a common theme in the headquarters of contemporary offices, but their inherent private nature has removed the possibilities for public interaction. 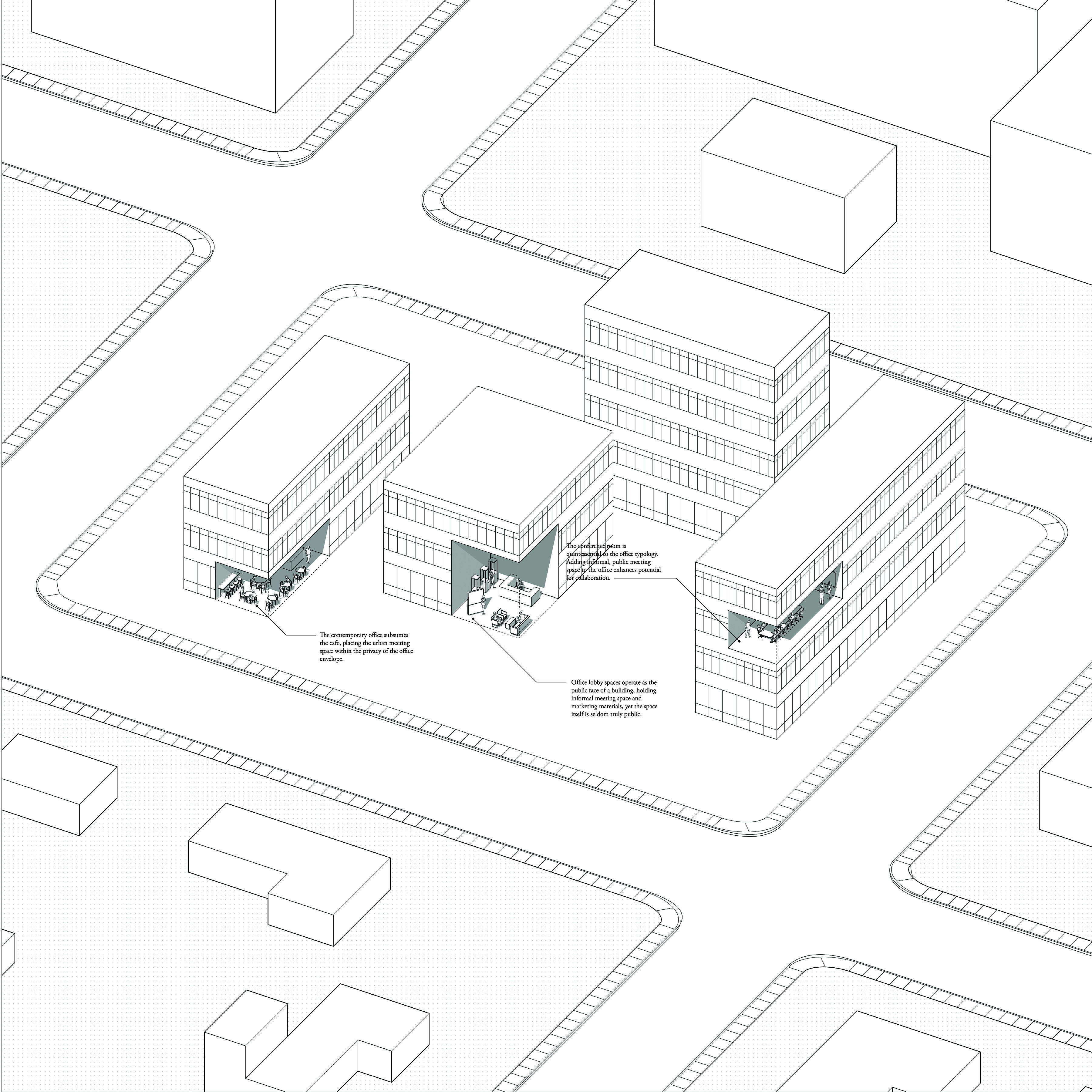 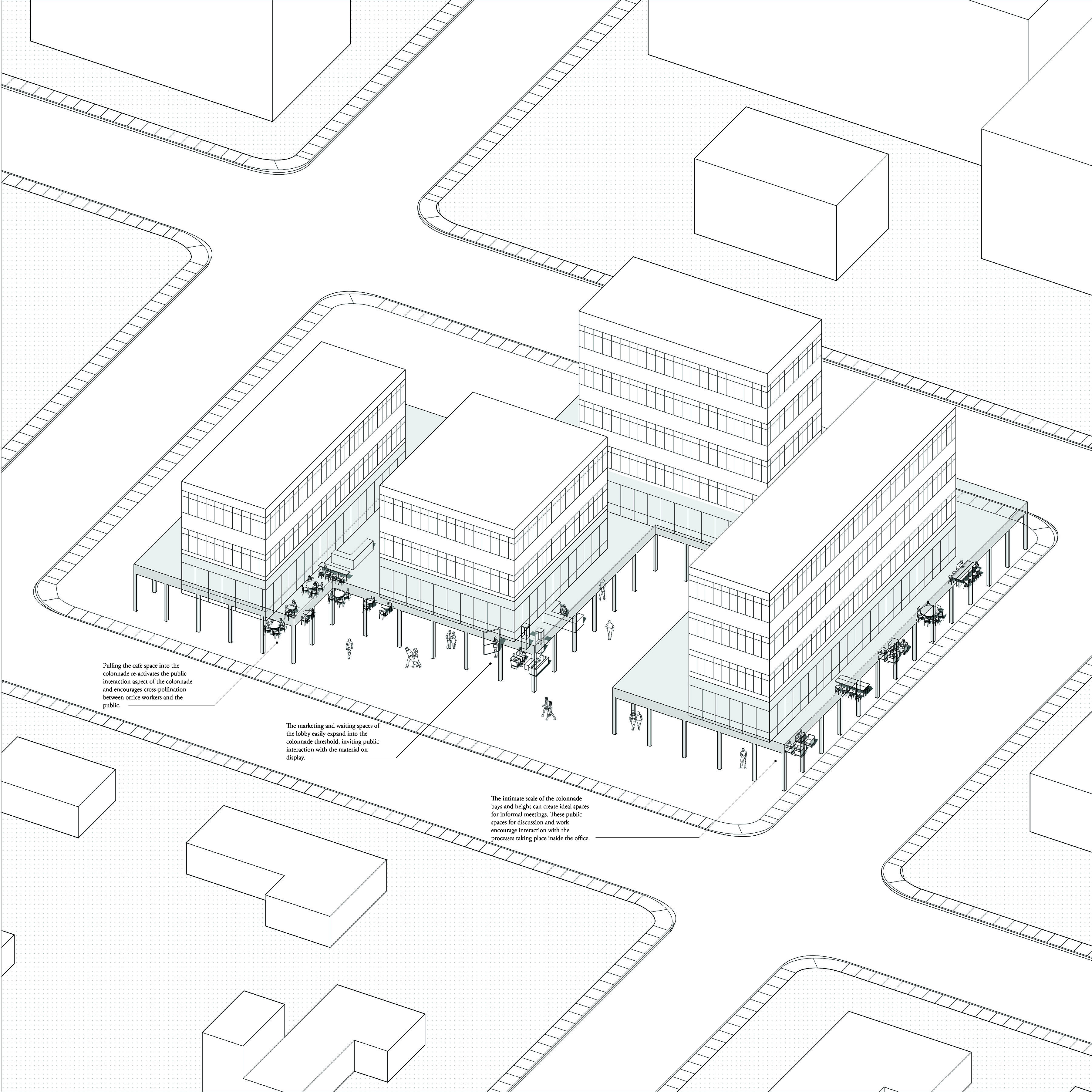 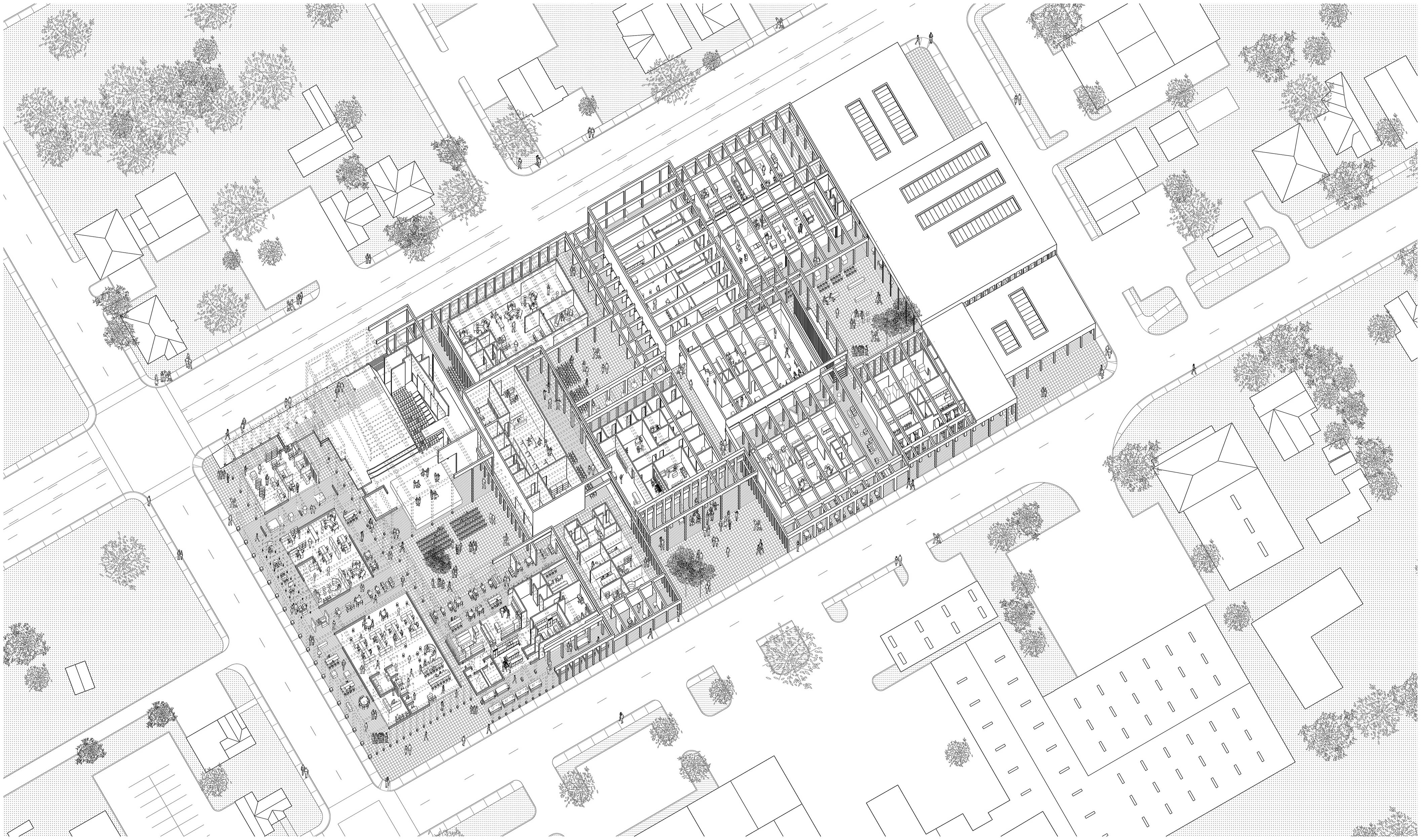 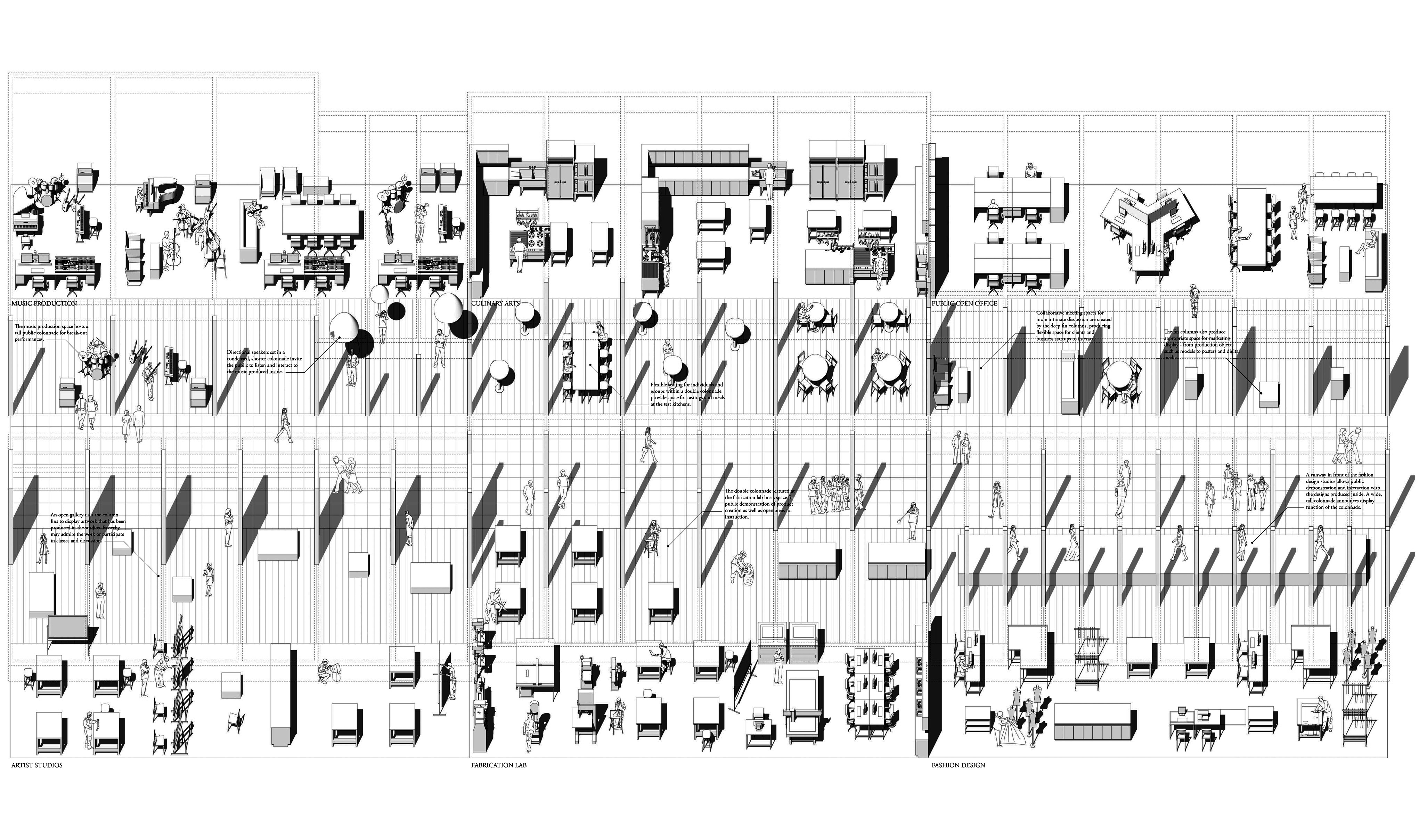 As offices have begun to domesticate their interior, it's often considered an attempt to promote creativity and encourage the happiness of their employees. Sam Jacob has termed those efforts the office "fun palace". While encouraging on the surface, there is a partially concealed side effect of encouraging workers to spend longer hours at the office. Placing the third space functions within the core of the office removes these functions from the city, avoiding "undesirable" encounters and, I would argue, opportunities for collaboration. This thesis projects an alternative by using the colonnade to host third space at the threshold between the contemporary spaces of work production and the urban environment. The use of the colonnade allows third space to receive a specific architectural condition, pulling social functions back to the access of the public. This allows interaction and feedback to take place between the public or the consumers and the producers working at the office.

...When the colonnade is used to host third space functions such as the cafe, lobby marketing space, or flexible meeting areas, the public is automatically invited to participate in the collaborative effort. Simply placing these functions outside the envelope of the office is not sufficient, they must be protected and operate as a threshold. By placing third space functions in the colonnade threshold around the office, contemporary work shifts from the closed-off inward-oriented model of the fun palace to an urban-oriented model of public collaboration that mimics a vibrant outdoor market. In the same way that vendors at outdoor markets may prepare and develop their product immediately adjacent to the public, the third space colonnade allows interaction - and collaboration - to take place again between the producers and consumers.

If the colonnade is to be used to modulate between various programs, its formal potential must be identified. Anthony Vidler's conception of the portico as a social condenser provides a base typology that aligns with the current need for threshold third space. He also identified the ability for the threshold to become autonomous through the use of a plinth; however his description fails to consider the subtle changes in quality of public, efficacy as a filter, and greater opportunity as the colonnade is modified.

...To investigate these and other spatial conditions of the colonnade, this thesis considers nine case studies. These projects have been selected for their varied spatial characteristics that each deliver different potential, but are presented in no particular order. Each modulation of the colonnade presents specific versions of public/private relationships, driven by the formal shifts experienced in the colonnade. To bring these concepts forward, the thesis employs a campus typology for a collaborative start-up work center located in East Austin on 6th Street.

...The thesis employs programs that are focused on creative work and production that might be found in the existing local fabric of companies, startups, and designers. Apart from some open office spaces that could be rented by different companies or individuals, these include programs such as music production, culinary arts, flexible 'hot desk' office space, art studios, fashion design, and fabrication labs. Drawing from the existing culture emphasizes the project's collaborative intent and potential for interaction.

Opportunities for interaction between third space and the public, and synergies between pavilions exist across the site. For example, where the fashion design and fabrication lab share a courtyard with the office space the third space functions in the colonnade are a demonstration space for the fabrication lab, a fashion runway, and cafe space. One can imagine the fabrication lab might produce objects for use around the runway and in the fashion design studio. The cafe encourages public interaction and observation.

...The galleries around the artist studios are generated by a set of fin columns to the East, encouraging the display of smaller sculpture and canvas-based art, while the gallery to the North is much more open with deeper bays and fewer columns - allowing the presentation of larger items or performance based art pieces.

...The entire project comes together to operate as a collaborative work space. By using the form of the colonnade to host third space, this thesis increases the opportunity for interaction between the producers of modern work and the consumer and re-calibrates how we understand the relationship between contemporary work and the city. The symbiotic relationship between work and the city is restored through third space, allowing the valuable, unexpected encounters to take place between the public and production. Modulating the form of the colonnade emphasizes the role and intensity of these interactions, and invites the city to participate in the collaborative work project. 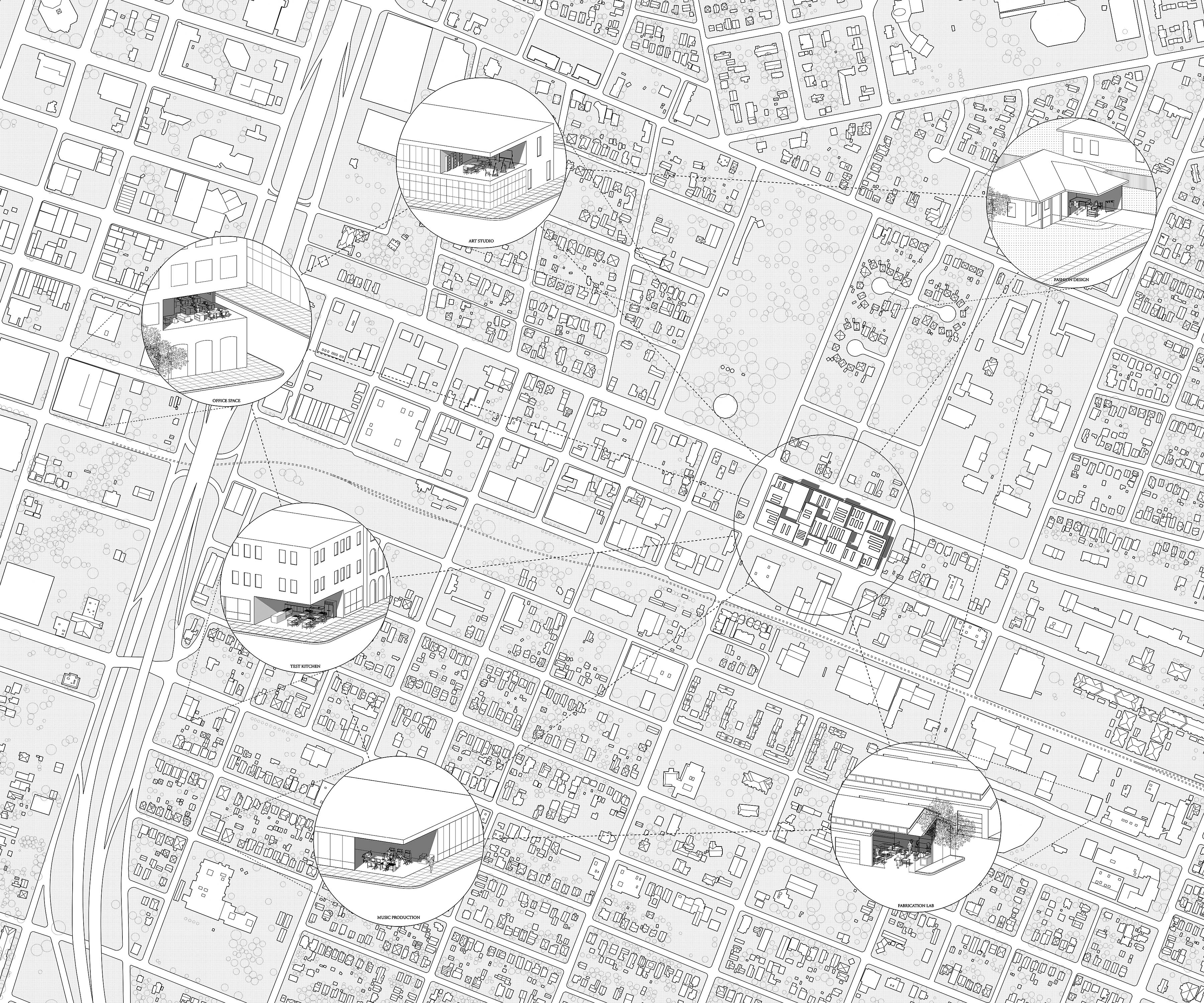 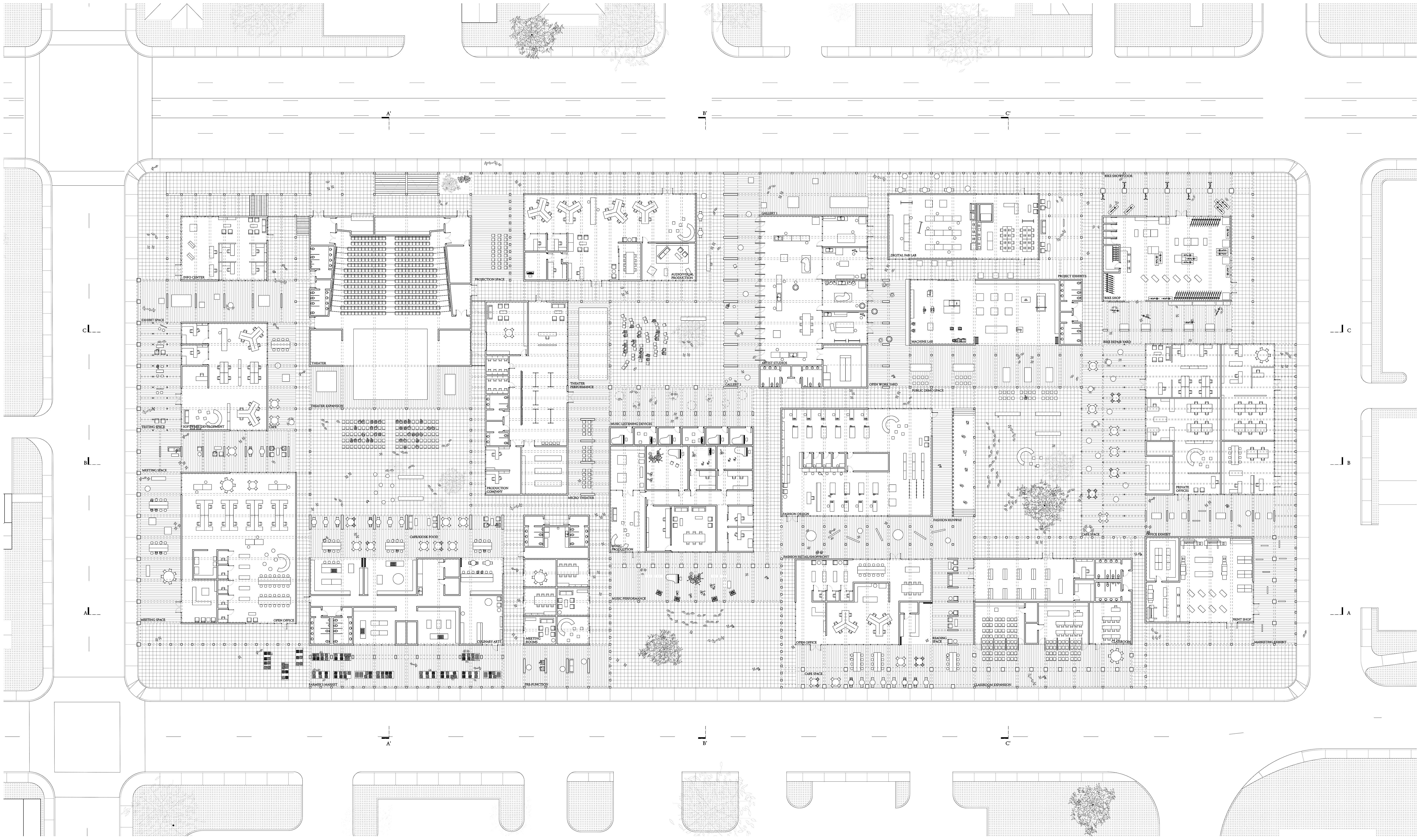 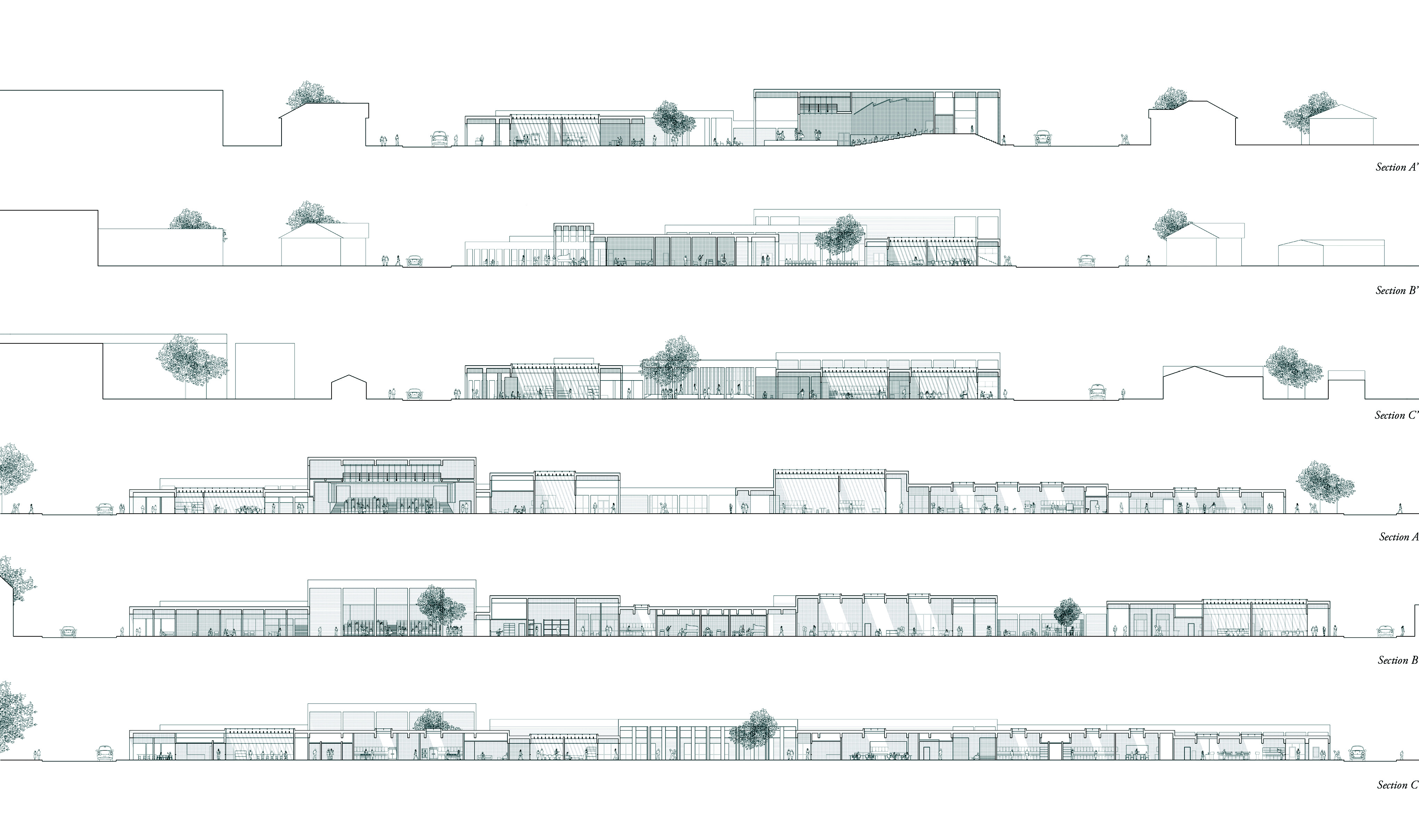 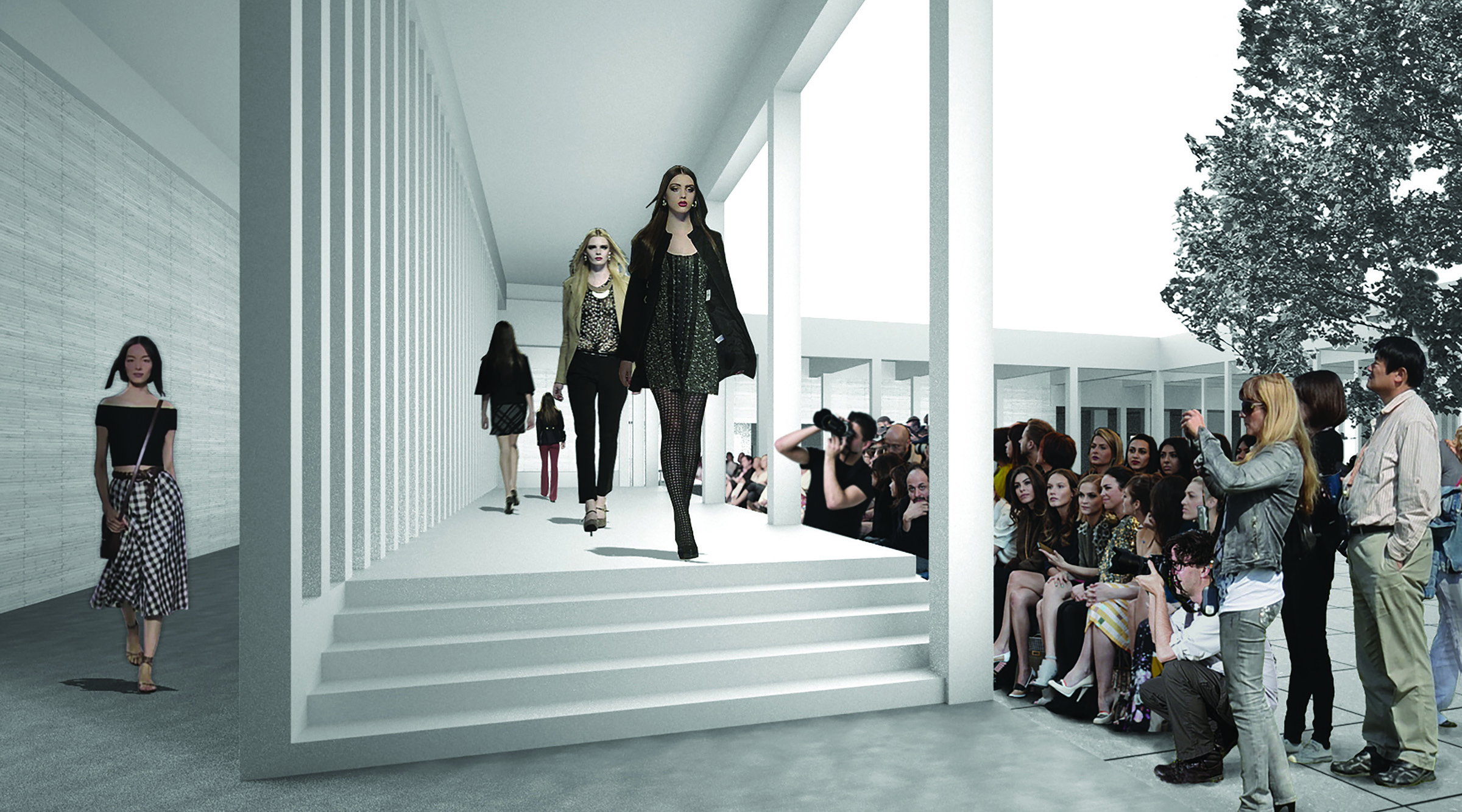 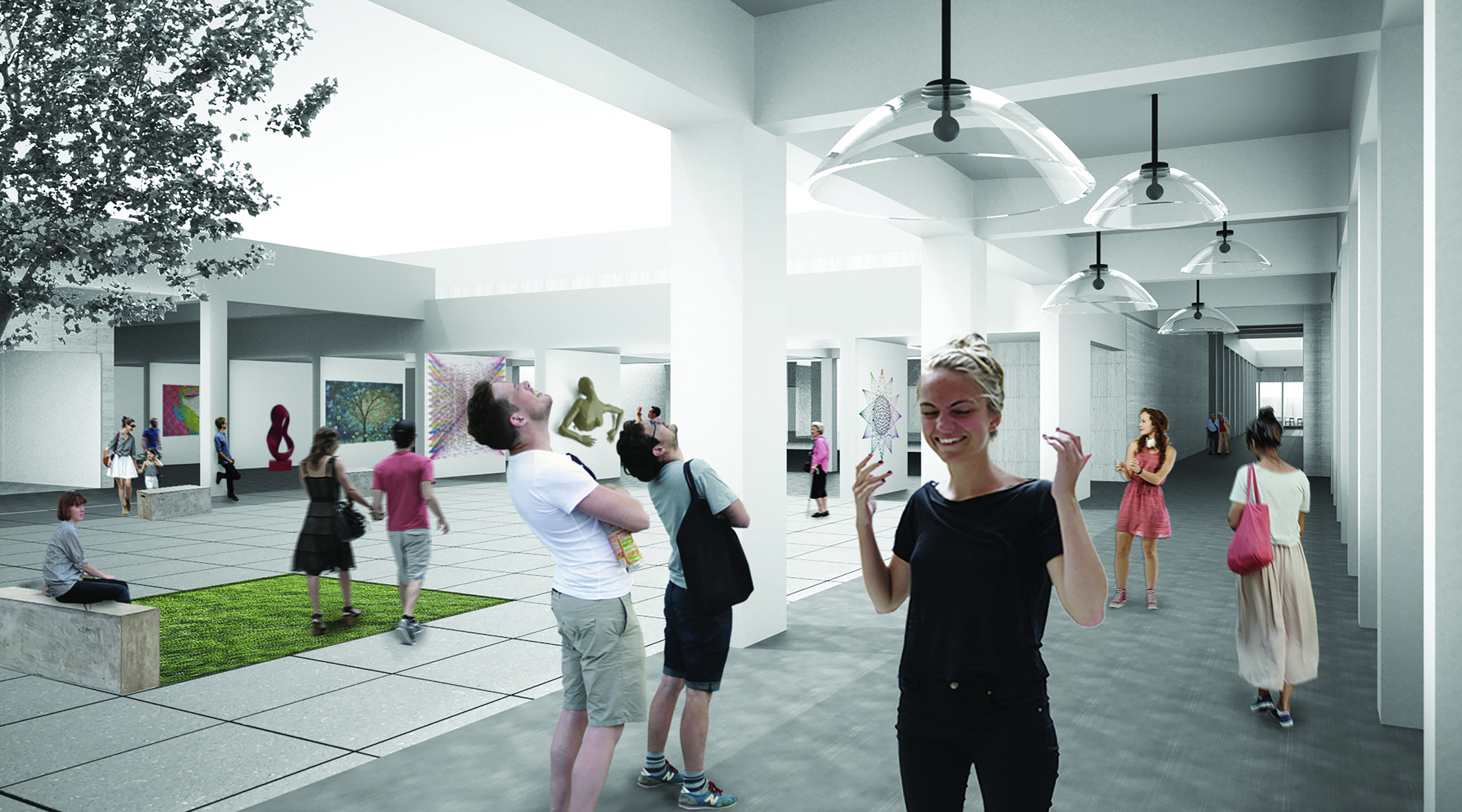 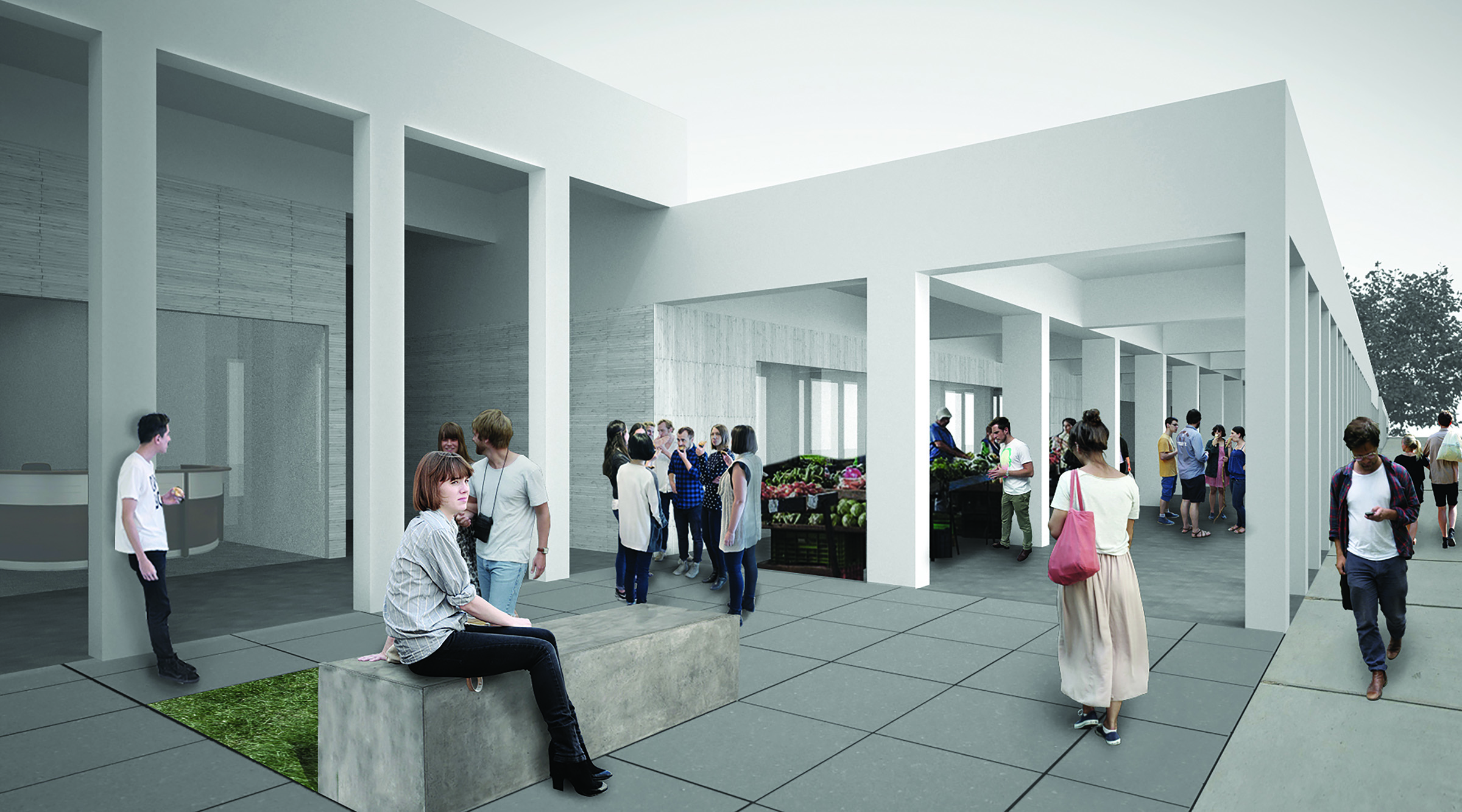 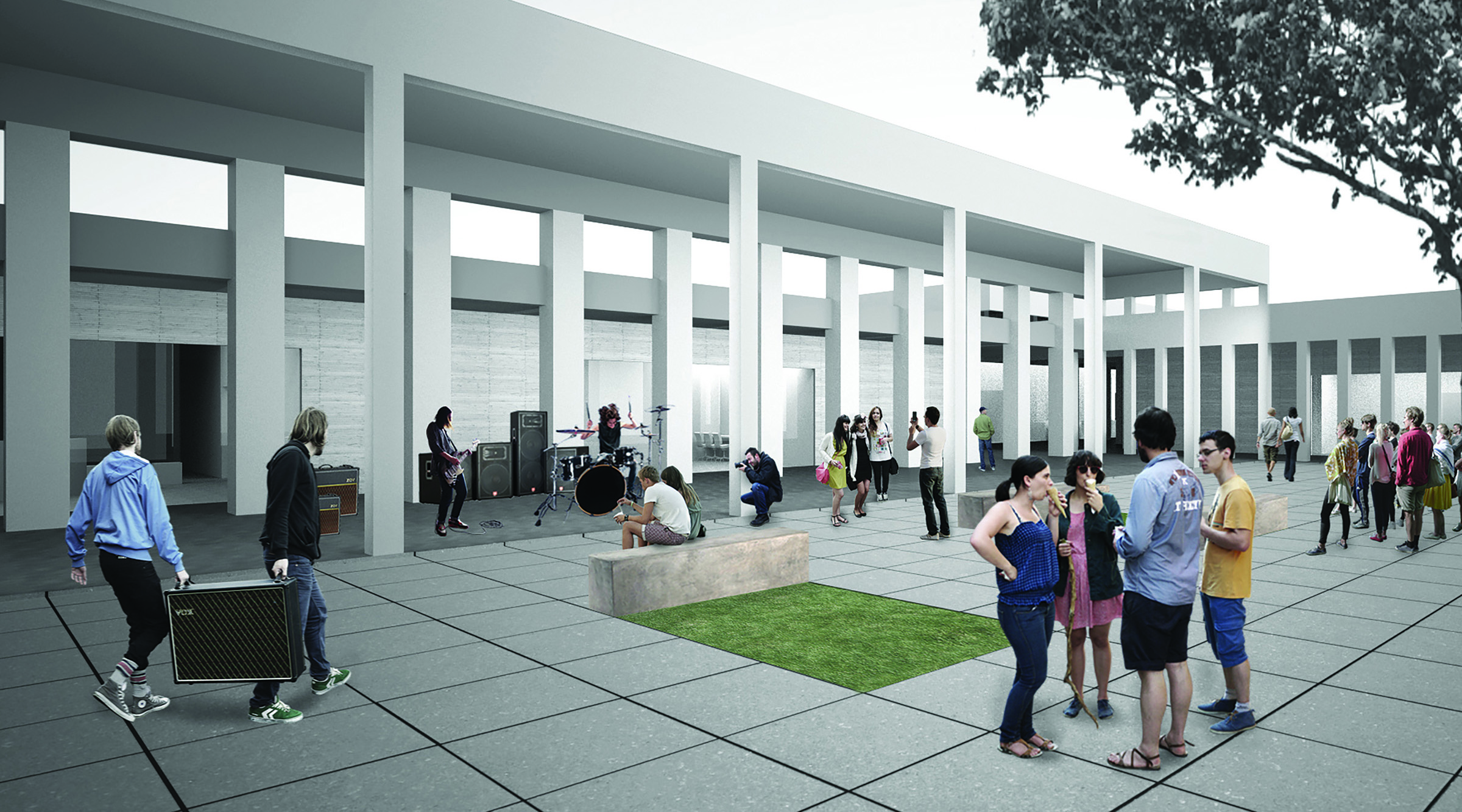 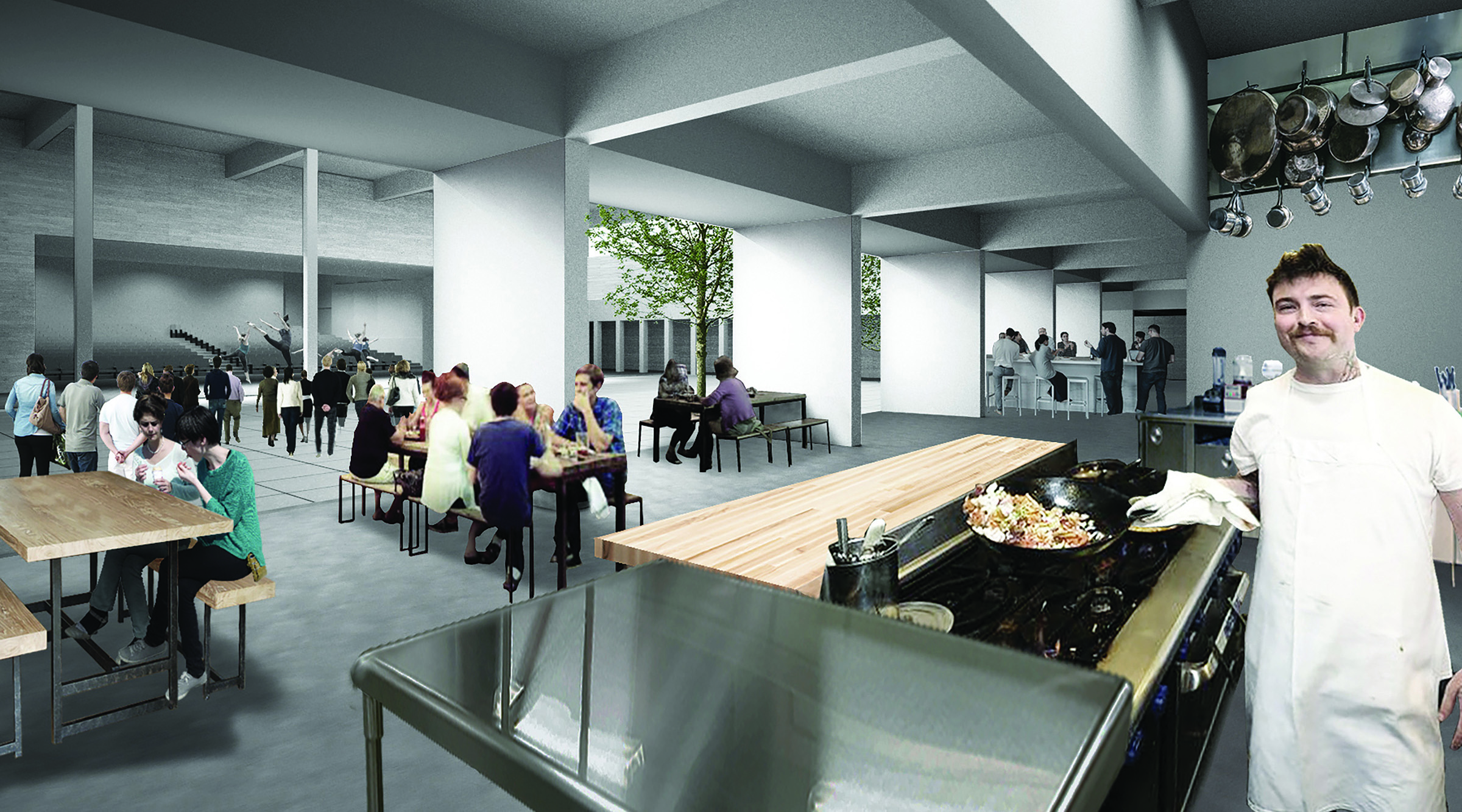 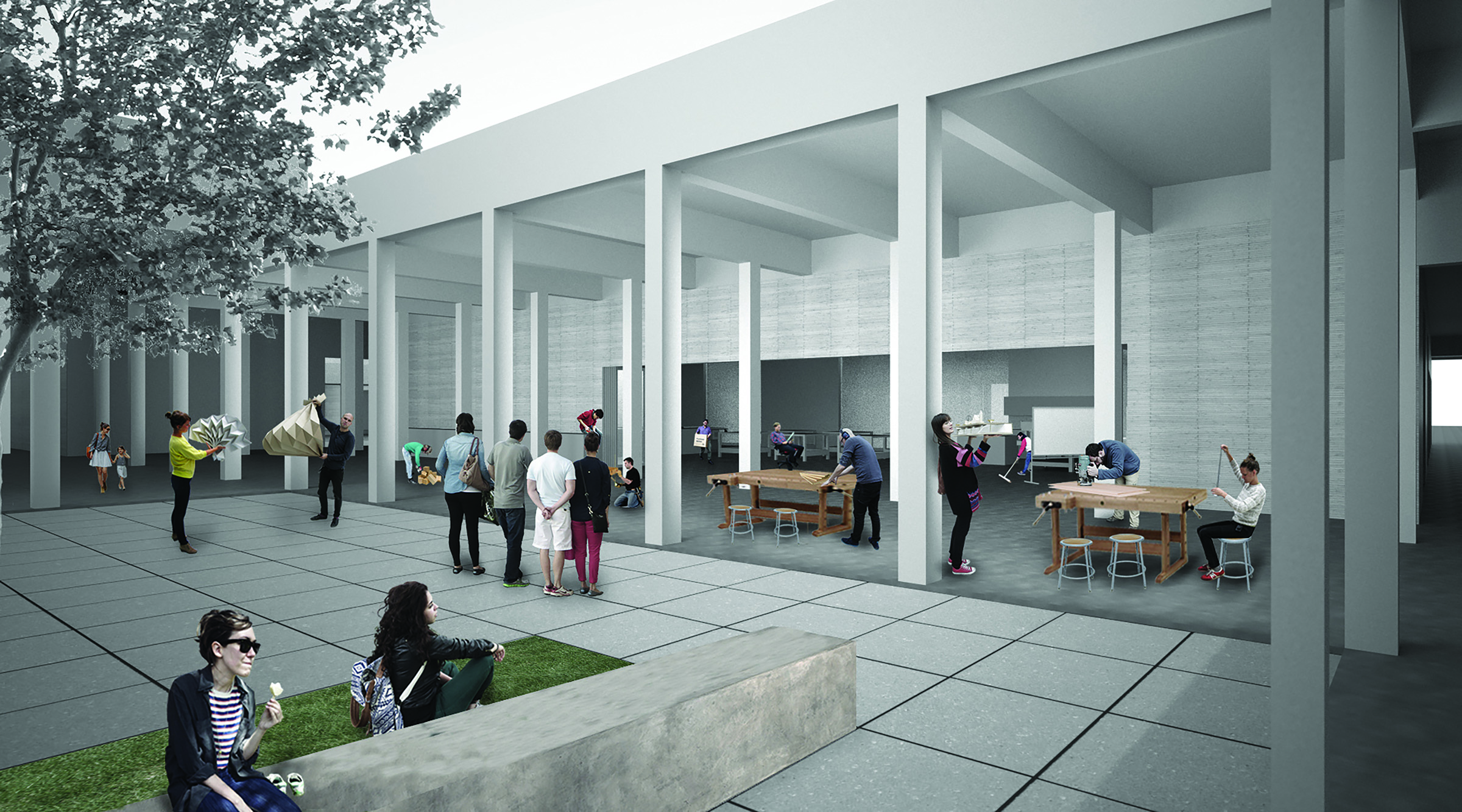